It's winter time now here in Korea and it's cold so you really do need to wrap up warm and that means winter hats - recently I bought a big fluffy hat which Rich calls my "Russian Hat"but this hat merely scratches the surface of crazy hats!

There are SO many crazy winter hats in Korea - my favourite are the ones that look like a large soft toy has been masscred in order to create them. So many of the children at my school are wearing cats, bears and monkey's on their heads - some even have the matching scarf which is the paws of the animal! My favourite so far has to be a boy we saw on the subway, he had a tiger hat with a tiger claw scarf - a little crazy but super cute. 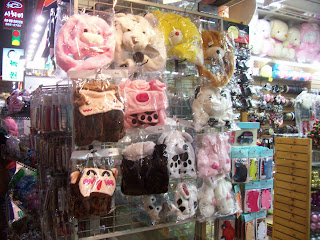 Where is your scary hat?

Don't worry I've been rocking the scary hat most of this week ;)