I really loves the films of Guillermo Del Toro (especially Pan's Labriyth) so when I heard he'd be making "The Hobbit" in Wellington I was pretty excited as there would always be the chace of spotting him around town somewhere as it's a pretty small place.

I also recently read about a book he had written called "The Strain" and thought it sounded awesome but I hadn't gotten around to reading it just yet....

So when one of the guys at work told me he'd be signing copies of The Strain at Unity Books I was pretty stoked.

So last night I waited for 2 hours in a queue of adoring fans to get my copy of The Strain signed, I managed to have at least two slightly crazy fans in front of me which made the whole experience a little bit weirder but meeting Del Toro was great! He was really lovely and friendly and chatty and even drew a cartoon version of himself in my book (well I think he did that for everyone but still - it's cool!). 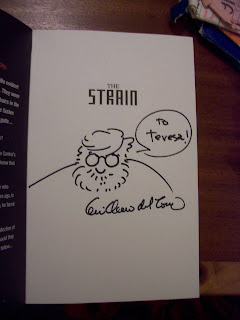