What we have been watching and what I want to watch!

When Rich and I returned to Wellington we decided it was movie time, so I headed down to Aro Video to pick up a DVD. My choice was "The Abandoned" - I didn't really know much about it but it did have a good review from Fangoria magazine so I figured it must be pretty good.

It's the story of an adopted American woman who heads to Russia, she's been searching for her parents for years and finds out her mother was Russia and long since dead but she has inherited a house from her in the middle of nowhere - from there as you can imagine things head pretty much down hill for both the woman and her long lost Russian twin brother who is also at the house. I didn't know what to expect with this film but I really did enjoy it, although it did leave you with a feeling of "WTF just happened" but in a good way. 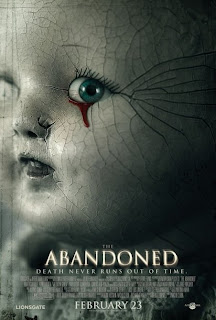 One of the "Previews" on the DVD for The Abandoned (yes it had previews - how very VHS) was a movie called "Wrestle Maniac" which looks like an amazing trash horror! I want to see this so bad but when I checked the database for Aro Video and they don't have it in yet. Here's the preview for the movie on You Tube - it's so bad it's good!