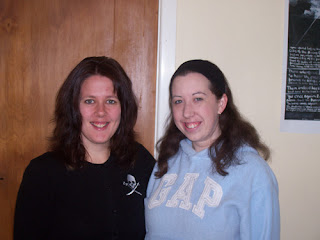 Over the weekend my visit came down to visit from Auckland - it was awesome to see her and awesome just to have a weekend of girly hanging out.

It was also kinda cool to show someone from out of town all my Wellington haunts - we had brunch at Midnight Expresso, did and bit of shopping - including of course the Illicit shop (where I bought shoes with pink poka dots!) and had dinner at Harem followed by a (rather violent) film festival film at Paramount.
We also had lots of time to gossip about life in general - yah!
Even managed to sneak in a bit of a walk along the waterfront with Ange.
A very fun weekend:)
Posted by Trees at 5:30 pm