This months challenge over at The Monthly Stitch is Frocktober - my original Frocktober plan was to make a Halloween themed dress for each week of the month. I love Halloween and thought this would be a great excuse to make four ridiculous Halloween dresses. 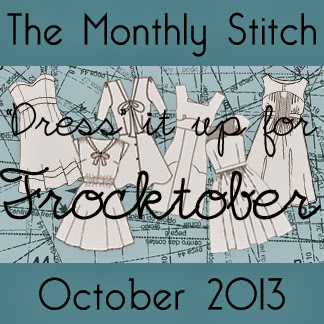 But then you know how things go - life gets in the way! It's now 15 October and I've only made one Halloween themed dress. I always have good intentions but making them into reality can be difficult. I've decided that I won't be too hard on myself for only having made one dress - the rest will come with time (even if that time ends up being November or December!).

Here's my first dress of Frocktober 2013 and I've rather chuffed with how it turned out - my purple kitty dress. 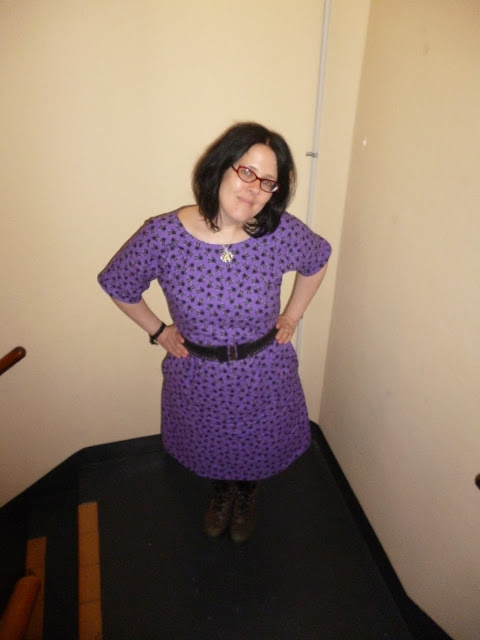 Remember how I visited Alicia and Bear in Pennsylvania and Alicia took me to ALL THE HUGE craft stores - including Joanns. I could have spent my whole trip budget a Joanns - but I restrained myself and bought only seven and a half yards. That included two and a half yards of this purple fabric with kitty print. 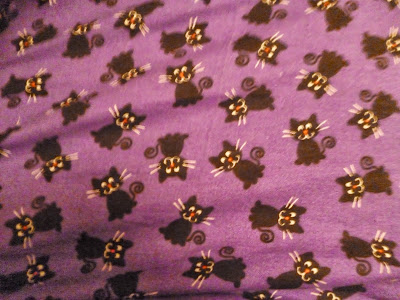 It's pretty adorable fabric! I love the cats and their happy faces and purple just seems like a Halloween colour don't you think? 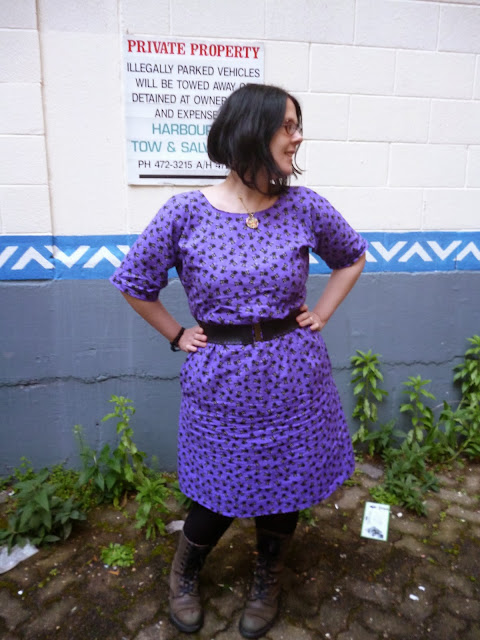 We are back in the delightful car park of our building - complete with weeds and random crap on the ground. 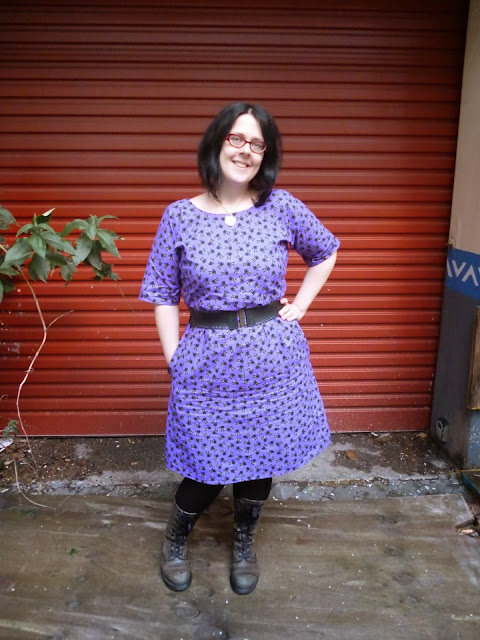 If any sewing geeks out there are wondering - I made this dress from a pattern in Sew La Tea Do. The pattern in the book is the "Too Cute Tunic Dress" which I have made countless times before (well actually more like five). I really love this dress as its just so simple to make and every time I've sewn it up it looks great. I guess I'm just one of those sewists who finds a pattern she likes and makes it over and over again. 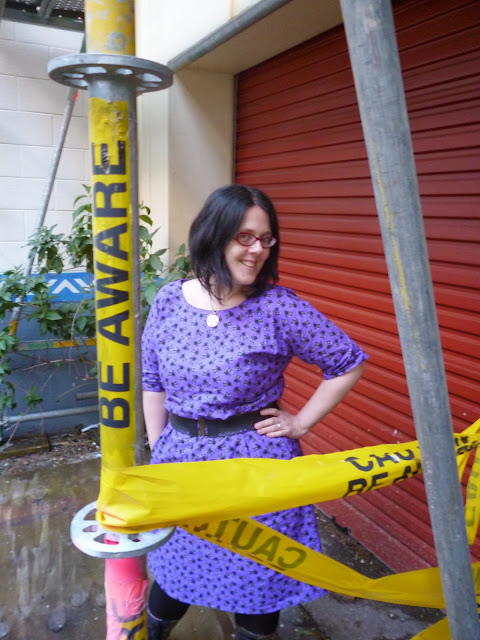 We had a pretty big storm in Wellington yesterday, which is a bit of a worry when your apartment block is covered in scaffolding and "stuff" is flying everywhere. See that bit of wood I'm standing on, it "fell" off the building and Rich helped the guy that runs the shop downstairs move it to the back of the building to get it out of the way - have I mentioned before how much I am looking forward to the scaffolding coming off the building? Because I REALLY can't wait until its ALL GONE!

Seen as we are talking about the storm and scaffolding - this building site near our house didn't come out of the storm so well. I took this photo on the way home last night, Wellington is known for its wind but this is kind of out of control. 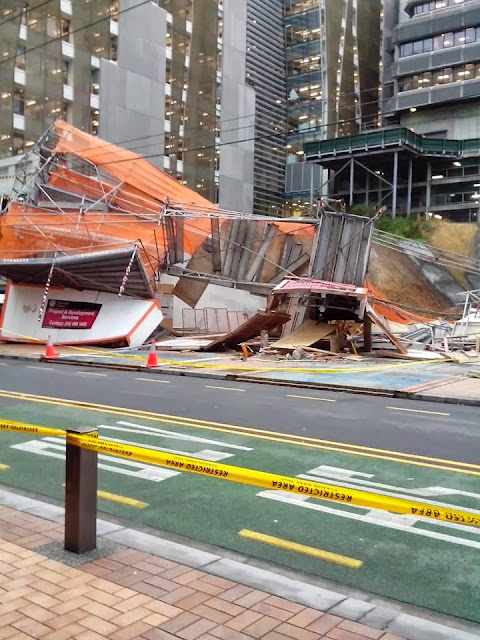 So its been kind of an exciting week so far - let's hope for calm skies and sunshine for the rest of the week!
Posted by Trees at 5:16 pm

Cute! ! Purple! I want to do more with existing patterns I'm happy with. I want a tried and true like you :)

The dress is amazing! I love the colour and the cute print. Can't go wrong with a cat print!

That damage from the storm is insane. I hope that's the end of it for you now and you stay safe!

Loving this frock on you....that style works so well, I love the cut. I wish we lived closer, I'd get you to whip me up one. Xx

i can't believe how quickly you made that fabric into a dress! it looks amazing!<3 it coordinates perfectly with your grape lollies! <3

Oh my goodness!! Must have been some crazy strong winds!!

That material is the cutest!! At first I thought it had spiders on it!! xx

ha so we are already two gals absolutely obsessed with halloween;) that is really an awesome idea to make each week one halloween themed dress, but i know what you are talking about sometimes you make plans and then you have so much other stuff to do or you just have no motivation to sew:( anyway that dress is a stunner! love the print! and hey maybe we try this next year together as a challenge would be a cool idea!
kiss,mary

Most definitely black cats with on purple is Halloween! The dress fits well and suits you - which is why you like to make it :-) Yay for the perfect Wellington day today.

Eeep! I love that fabric. So cute! The dress is just darling. :)

Love LOVE purple and kitties! This is adorable!