A few months back a few of my friends from the Wellington Sewing Bloggers Network set up a monthly sewing challenge via The Monthly Stitch, which is an ongoing sew-a-long with a new challenge each month.

I didn't quite get around to completing the August challenge, but I decided I WOULD do the September Challenge which is vintage sewing patterns. 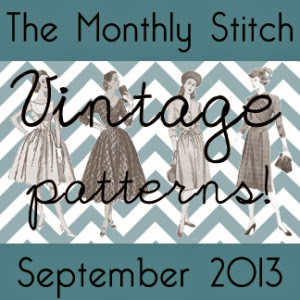 I'm sure that many other people doing this challenge will be making patterns MUCH older than mine - I'm pretty sure there will be a lot of patterns from the 1940s and 1950s.  However, whilst I was once rather smitten with the 1950s - really these are not decades I'm crazy about in terms of style. I'm much more of a 1960s/1970s girl (ok I admit it the 1980s was pretty rad) so that's what I made.

First up the pattern is my trusty old Maudella 5619 that was gifted to me by Vix. It had been my intention to make a vintage pattern I had not made before for this challenge, but the month kind of got away from me and I figured I should just make something I was familiar with or I would not have time to  make anything at all.

I could not find any further information about Maudella 5619 online and its not dated, but I'm guessing from the style and the art on the pattern envelope its from the 1960s. I chose to make it in this GLORIOUS stretch sparkly fabric I bought at the last fabric-a-brac. 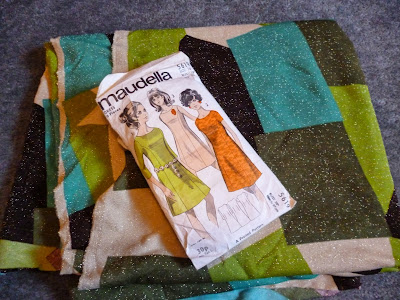 Action shot of cutting out the pattern - I use novels as pattern weights, because I'm super fancy. 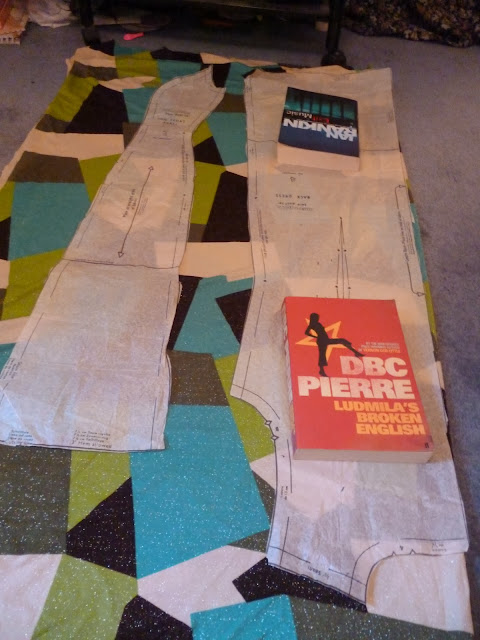 I REALLY wanted to do some dress action shots for this post, because this dress looks pretty sack like if its not on an actual human body (or dress form). I planned to do this after work today as daylight savings started on Sunday. But the weather was pretty grey, dark and rainy today and when I got home it wasn't the kind of weather for outfit posts. So you all will have to cope with sack like photos for now and I'll add action shots at a later date. 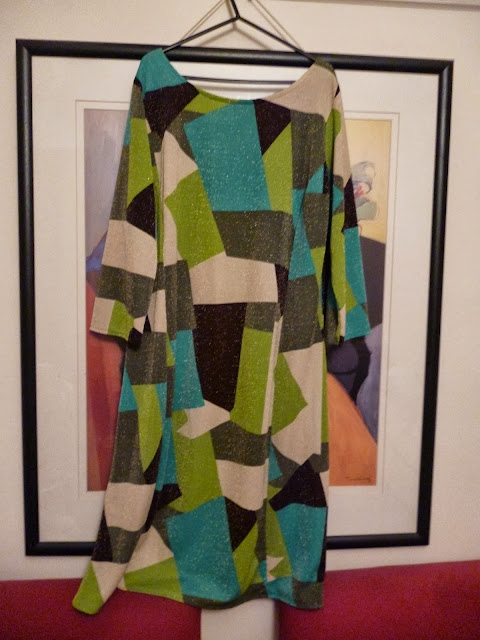 Like I said - it looks sack like when its not on a body! But I was determined to do this post before September ticked over to October.

This is the fourth time I've made this dress pattern (because I'm the kind of sewist that finds a pattern she likes and makes it over and over) and I think the construction on this dress is some of the best I've ever done so feeling pretty pleased with myself about that. 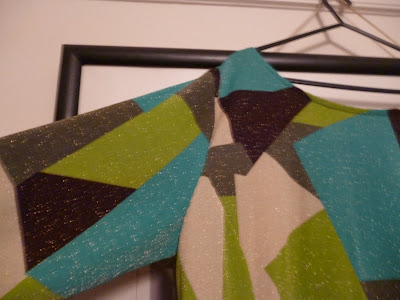 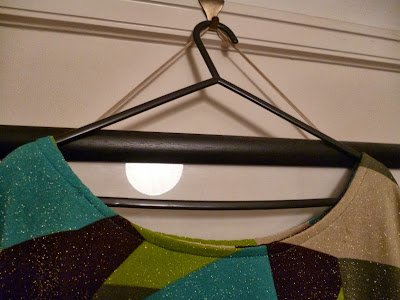 Octobers Monthly Stitch is "Dress it up for frocktober" - I think I can manage that!
Posted by Trees at 5:27 pm

No wonder you keep asking for action shots! :D
Hey, I'm like you too -- finding a good pattern and making multiple copies of it in different patterns. If it works, it works, right?

Ah I wish I could sew >< Or I can somehow, but I don't have space for sewing machine. This dress is lovely. This sorta posts always make me envious ><
x

Gawd, I love that fabric! Gagging to see it on.....XXX

What amazing fabric, I bet the dress will look great on - it looks pretty fab hanging up too! Such a cool pattern. xxxx

Ha, I use tins of baked beans as pattern weights because I'm super fancy too. I love the fabric you used. I bet it looks great on.

That is super rad fabric, but so suits that style of dress. Looking forward to seeing the selfies of this one :-)

I LOVE seeing your sewing creations! You are so talented! I tried to make a dress like this a few years ago for a 1960's party- to say that I failed was an understatement.

I'm incredibly jealous of your skills. You literally have any item of clothing at your fingertips!! xx

oh this is really a fabulous frock! it looks like a pucci dress!!! you have to post a picture while you are wearing it soon! you are the perfect swinging sixties girl;)
kiss,mary

I didn't realise the fabric was sparkly too, now I love it even more! :)

This is so cool, and as someone else said, very Pucci. Can't wait to see the action shots!