The first of September was officially the FIRST day of spring and now its actually starting to feel like spring. There is actually light left at the end of the working day which means we can take outfit photos again! 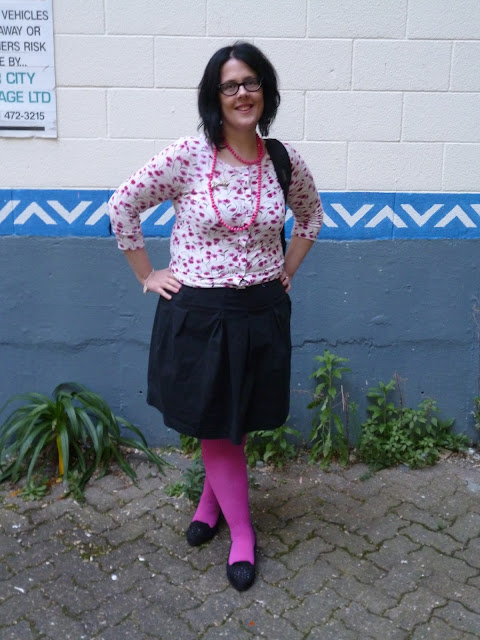 Yesterday I was in the mood for pink, pink and more pink! I've noticed that since the weather has become nicer again I am taking more care in the way I dress - does anyone else find that?

Nothing in this outfit is made by me - but most of it is second hand, its a mighty "cheap" outfit really.

Cardi - Clothes Swap (originally Glassons)
Skirt - Op shopped at Opportunity for Animals, Newtown (originally Cue)
Beads - Given to me by Chloe (from a bulk lot of jewellery she no longer wanted)
Tights - I don't remeber
Shoes - Avon

Also seen as the sun isn't setting until much later Rich and I headed out for a walk before dinner and even the sky was pink last night - so beautiful. 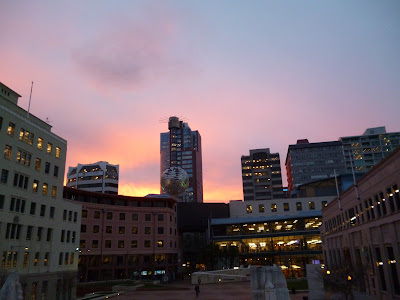 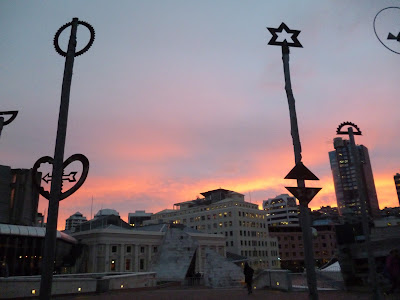 Have a lovely weekend!
Posted by Trees at 7:43 am

I love the cardigan. I'm always trying to find a cute floral print cardi. I love all/mostly second hand outfits. I like tallying up how much they cost me and then feeling smug that it was only $15 or something.

I know right, coming home from work in the daylight is definitely a liberating feeling - that alone gives me more energy to do stuff once home!

I love totting up my outfit costs and laughing to myself, it must be a thrifter's thing! Love you in pink! x

pink always puts me in a better mood;) you look lovely! the pink tights look great and i also adore that cardigan!
kiss,mary

I love the beginning of Spring when the days get lighter, and not so many layers are needed... Sadly we're just going in to Autumn in England, and it's already chilly, which is unusual. I'm hating the darker evenings already.

Love the outfit you're wearing, especially those amazing pink tights!

it's getting darker earlier here now - i guess that's because the sun is in wellington!

i love pink and you look super cute as always! <3

Here she is! YAY, Spring is really kicking in bigtime, although we've been getting some bloody chilly breezes down here! Love that cardi, most particularly. Love having good light for pix!
XXXXXXXXXXXX

I love pink! You match the sunset.