Fortieth Film - Night of the Hunter 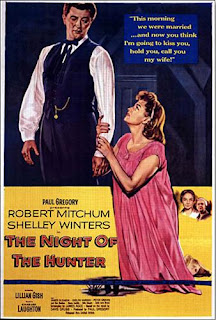 I am finally making some progress with my "110 films in 2010" as I am now up to film number forty!
Rich had already seen this film before on the big screen with Joseph and I hope sometime I will have the chance to see it on the big screen too.
In this film, Harry Powell is a rouge who spends his time finding down and out widow's with money hidden away somewhere. He marries the widow and dispatches with her and runs off with the loot. All whilst posing as a preacher that everyone in the film seems to be rather taken with. He is honestly one of the most despicable characters I've ever seen on screen - you really don't like this guy and want him to get what's coming to him.
Whilst in prison, he meets a man whose on death row for killing two people and stealing $10,000 (which I imagine would have been a huge amount of money in 1951).
The man he's met in prison hid the money before he was arrested and only his children know where the money is - his wife has no idea.
Upon his release from prison Harry Powell decides to find the grieving widow, Willa Harper and her two children Pearl and John. His plan is to marry Willa and of course take off with the loot. The whole town is transfixed with this preacher man and almost immediately he is married to Willa.
Things go pretty much down hill for the Harper family from here, Willa doesn't know where the money is so Harry spends most of his time bullying the children to find out where it is - whilst Pearl holds a soft spot for the "preacher", John remains loyal to his dead father and insists that he and Pearl keep their father's secret.
Ironically the money that was stolen by the children's father is inside the doll that Pearl carries everywhere with her - meaning the money is literally under Harry's nose the whole time.
Eventually, being the rouge his is, Harry gets tired of finding out the location of the money the "nice" way and decides to kill Willa and claim she's run away. Leaving everyone in town feeling sorry for him having to raise two children on his own.
Without their mother's protection, John decides it's time to make a run for it. After a chase the children manage to get away from Harry by travelling down stream in a skip.
The film appears to be set in the depression era, where I assume many children were abandoned by parents who could no longer care for them. With this in mind, John and Pearl travel through rural area's sleeping where they can and finding food wherever they can get it.
However, finally they are found by Miss Cooper, who is officially one of my favourite female characters in a film.
There are so many films with weak female characters who don't know how to get along in the world without men.
Miss Cooper is the exact opposite of that - she is already looking after three children when John and Pearl arrive and has no problem taking on two more, as she says during the film about the new additions to her brood, "I'm a strong tree with branches for many birds. I'm good for something in this world and I know it too".
The rest of the film revolves around Harry trying to get the children (or money) and Miss Cooper trying to save them.
This is a much longer review than I usually write for a film but I simply loved Night of the Hunter, I won't say how it ends thought, because you're going to watch it and find out how truly beautiful and amazing it is for yourself!
Posted by Trees at 2:11 pm