So as those of you who know me well know, I am rather attached to my black knee high Doc Martin boots - so much so that they are basically an extension of my body. I've worn them to everything from gigs to weddings and I even wore them on my flight to China last year as they were the post comfortable footwear I owned - which I'm sure some people think is a little strange.

I've had to have them repaired a few times, usually because the zip had broken, but today was a sad day when I realised that my boots were broken once and for all.

You see at the end of last winter then began to leak a little in the rain and I realised today that they had split at the sole - and there's nothing that can be done to fix that. Also the soles were wearing through. Basically my boots were very very sick and it was finally time to take them off life support. 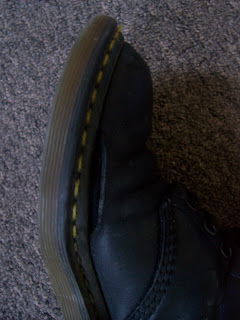 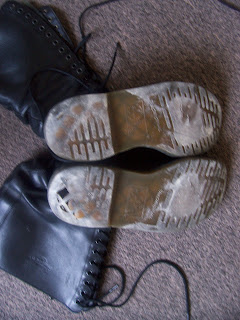 So today I decided it was time to part with my old boots. But never fear - you won't have to get used to me wearing anything too "lady like", lets face it, when you walk as much as I do in all weather a pair of girly shoes just aren't going to work (or last very long). So I went and bought another pair of Black, 20 up, Doc Martin boots. Look at how shiny and new they are! 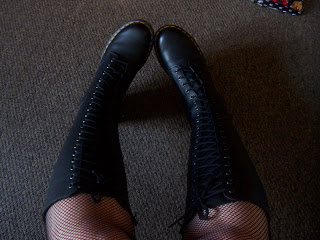