I really like the idea of magazines, it's fun having something to flick through, but unfortunately there aren't many magazines in the world I like so called "woman's magazines" largely make me want to barf. I really don't care about Brangelia or whether Jessica Simpson is "fat" or not - it's all bunch of arse as far as I'm concerned.

There are really only three magazines in the whole world I like - "World Sweet World"(a Wellington based craft/environmental magazine) "Bust" (a feminist magazine) and "Craft". 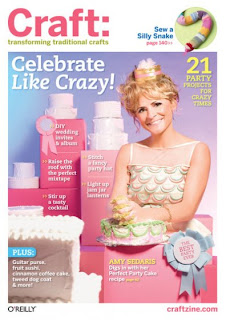 So you can imagine how annoyed I was yesterday to find out that production of Craft Magazine is going to be stopped due to so much of the magazine being online already and moving away from a paperless society and all that kind of stuff.

All of this I understand and appreciate but there's nothing quite like having the chance to flick through a cool magazine. Plus I prefer making things from books over the internet - I'm not sure why I just do.

So it's a little sad really and now I am officially down to two magazine I like to read. But on the upside the final issue does have some cupcake related crafts - so life isn't all bad I suppose.
Posted by Trees at 9:10 am