Weta were one of my favourite bands back at university - I can't remeber them coming to Hamilton, maybe they did and I missed it? Or I was too poor to go?

Anyways Weta was a fantastic band and they did the great rock n roll thing of releasing one amazing album, then touring and then breaking up to never be seen again.

Until now that is - the band played at Southern Amp (which I wish I could have gone to **sigh**) and are now playing at San Francisco Bath House tonight and I have tickets in my wallet right now to go and see them! It's all very exciting! 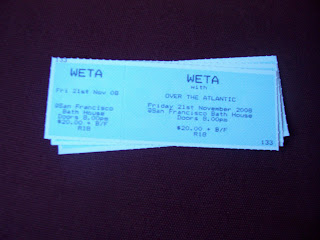