Some Crafts for my friend Sue

My friends Sue and Conor came to visit Wellington recently as part of their "Farewell Tour" before they take off to Britain to live for a few years.
It was Sue's birthday months ago - but Sue, Conor and I have an ongoing tradition of giving each other our birthday presents MONTHS late. It's kind of a nice tradition - because you know that sometime months and months after your birthday a random present is going to turn up in your mailbox and make you smile.
Here's the two things I made for Sue's birthday, the first is a soft toy Poo. I remeber telling a few people about this and they thought I meant a Pooh (as in Winnie) but I meant an actualy Poo - actually it was decided on the night that this guy is more of a turd than a Poo. 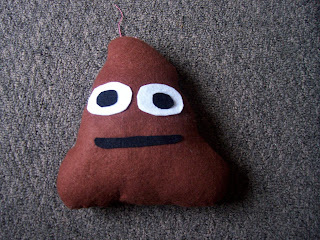 The second thing I made for Sue was a cross-stitch and seen as we both grew up in the naki I thought she would appreciate this red-neck themed design. 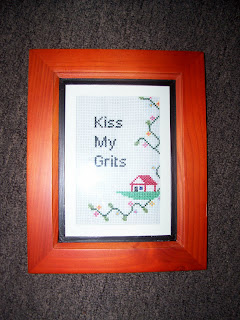