Last Saturday the Queen Elizabeth was in Wellington Harbour and the port was offering tugboat rides out to see the boat. We had planned to head out on a tugboat and have a look with out friend Andre and his son, but when we got there at 2pm we were told that too many people were waiting and the tugboat rides were officially "closed" for the day.

However there was a New Zealand Navy Ship in the harbour, the Pukuki that was open to the public so we went on board and had a look. 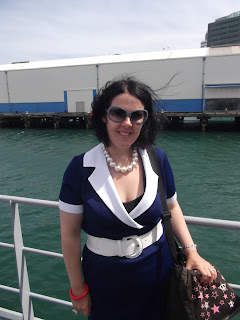 I was wearing a new vintage dress that I really love - its a little but nautical as well. I also love these completely oversized "pearls". 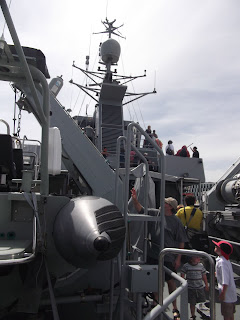 Here's a photo of the ship itself - there were a lot of people on board having a look around as you can see. 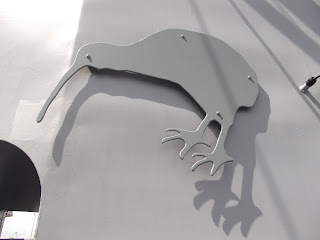 A Kiwi of course - it is the New Zealand Navy after all! 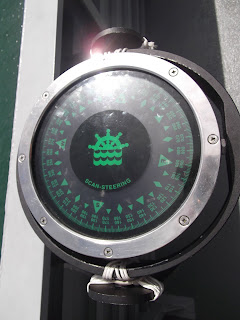 This was the compass on the boat - this picture doesn't even capture how crazy big this thing is. 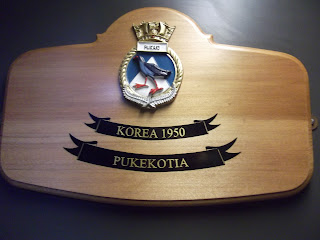 The boat we visited was only two years old - so I think this must have been from the boats predecessor. There were a lot of bits and pieces like this on the boat. Sheilds and what not but I chose to take a photo of one related to Korea for obvious reasons.

Then it was time for a historical ship - the Hikatea has been in Wellington Harbour for as long as I can remeber. Its an old historical ship and crane - there were some photo's on board of it lifting a ferry. The ship is really old, originally from Scotland and is now restored and run by volunteers. It's a pretty impressive old boat but in need of much more money and TLC. 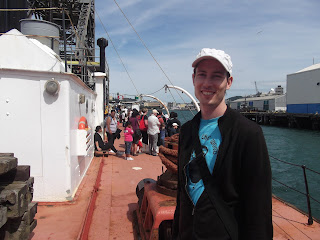 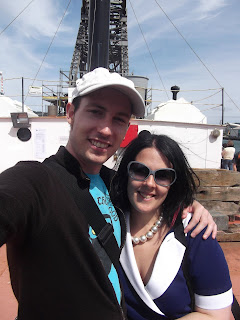 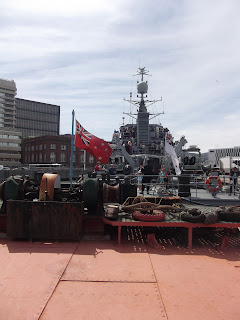 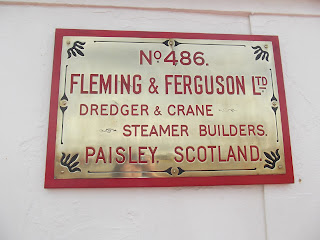 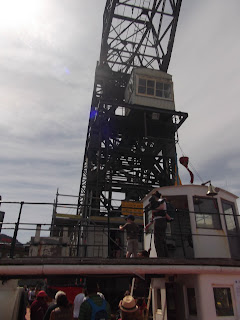 Also isn't the weather in these pictures just amazing - Saturday was such a perfect day - sunshine with just the perfect amount of wind. You have to love Wellington on a good day.
Posted by Trees at 5:22 pm

that dress is phenomenal!! you look so perfect with all the boats in the background!

Aww that looks like so much fun! And your dress looks so pretty!

Gawd I love that frock!! The massive pearls are super!!
You most certainly do need to pop on down sometime,there's plenty of opshopping to enjoy!
:)

Cuuuute dress! It looks like you guys had a great time. I've been trying to catch up on your blog and it seems to take a while to load; would you happen to know howcome?

Thanks for all the comments on my dress - its one of those online vintage finds that actually looks even better in person.

Courtney - I don't know why my blog is taking so long to blog. Technology is a mystery to me!

Helga - Holy Crap are you ok down in Chch. All of Aotearoa is thinking of you!