As I said in an earlier post, this year Rich and I decided to do Christmas stockings for Christmas day. We usually buy something for the house, but this year decided to fill a stocking for each other (with a maximum value of $25 dollars in presents, which was difficult in itself) the only problem was we didn't actually own any stockings and didn't want to go for what comes standards in the shops.

So its pretty lucky I can sew right? I decided  it was time for me to use up some of my stash and make some new stockings. 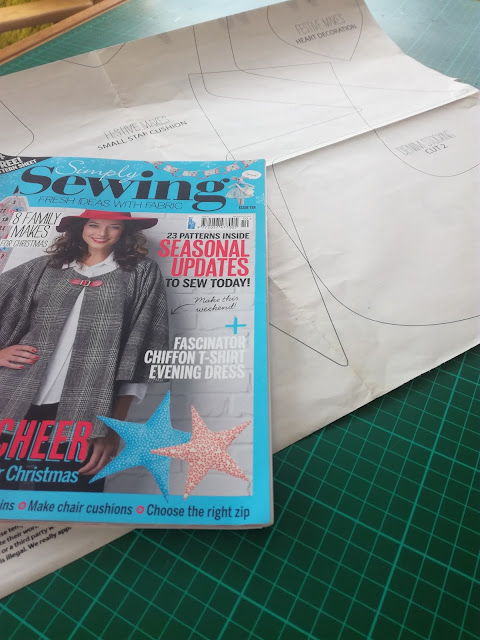 I'm a fan of Simply Sewing magazine, it has a lot of simple dressmaking projects as well as homewares and general "crafty" stuff. I knew I  had one somewhere with a pattern for Christmas stockings and I was right! This issue was from last year - the one downside with this magazine being in New Zealand about three months (I KNOW THREE!) after its released in the UK is that by the time we actually receive the magazine down here that when we finally receive the Christmas issue, Christmas has LONG finished. 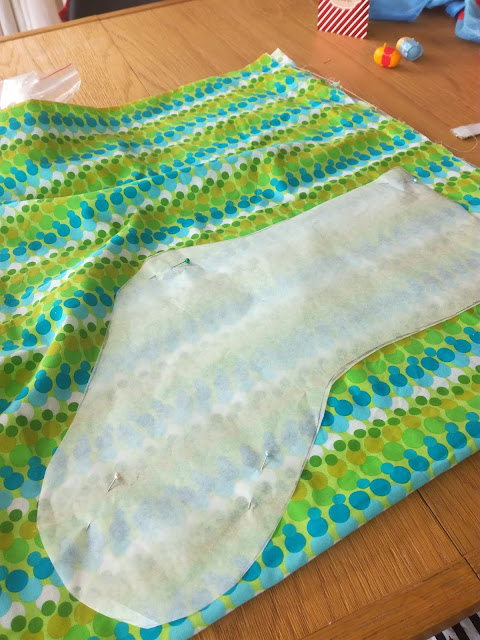 One of my favourite things about small craft projects like this is that it means you're able to get rid of a lot of smaller pieces of fabric in your stash. I mostly do dressmaking, which means some of the smaller lengths I end up with sit around for a long time before they get used. I got this fun retro looking fabric ages ago at a fabric swap, but I got such a small amount I wasn't able to use it for dress making projects.

I made Rich's stocking first, the retro fabric above is the lining. The outside fabric is actually little cassettes which I LOVE - this fabric was from a local fabric store Made Marion. 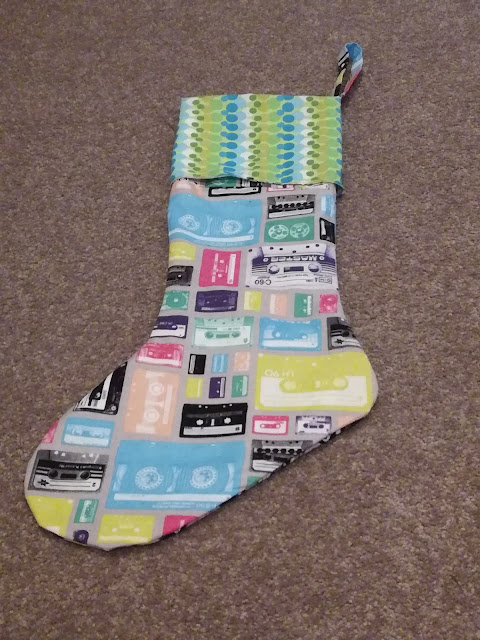 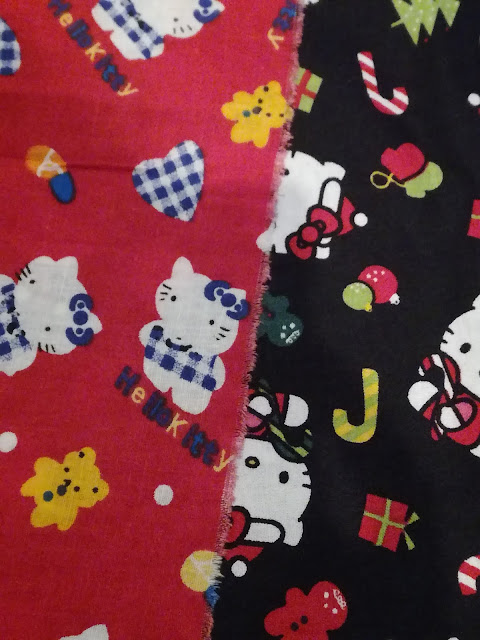 The black Christmas fabric I bought from a fabric resale group on Facebook, the red fabric I've had or a very long time! I remember buying it from Trade Me WAY back when I first started to sew, I made a wee pouch from it, so happy to be able to use up the remaining fabric. 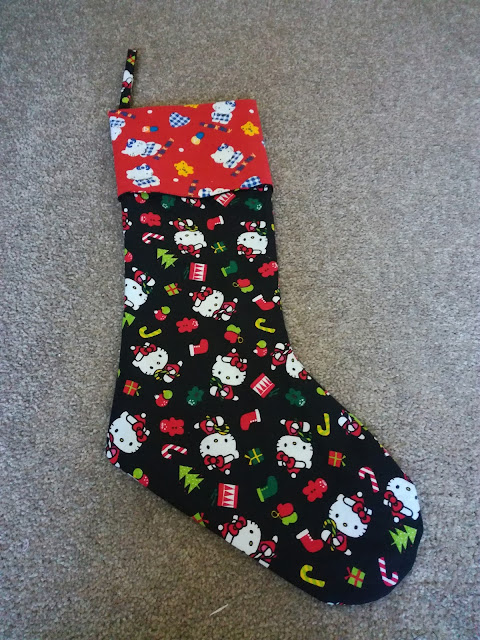 Finally, here's the two stockings side by side on the wall - much more fun than your standard Christmas stocking right? 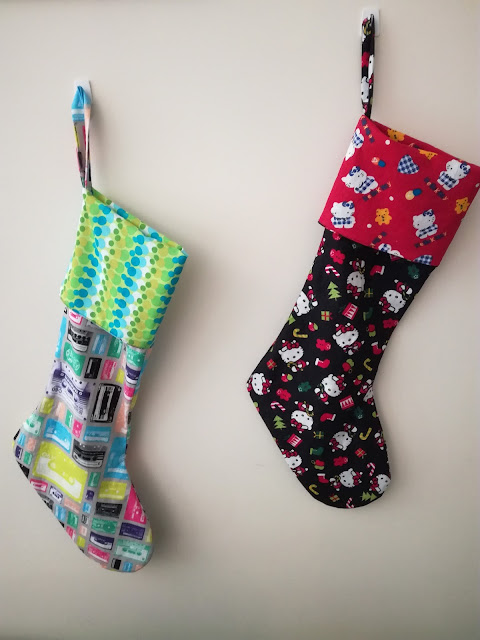 After I sewed up these stockings, I realised I needed to sort out a bunch of presents for friends that we were seeing during New Years holidays.

As you all know, I have A LOT of fabric and I liked making these stockings so much that I decided to make EVERYONE (six people) stockings. I guess I've spent about a whole day making stockings - but it was worth it to see the look on everyone's faces.

I actually bought this fabric for a friend for their  birthday to make cushions, but the fabric arrived too late and had been sitting around in my stash. I decided that while the cushions may not have worked out, this was the perfect chance to make a hunky stocking. 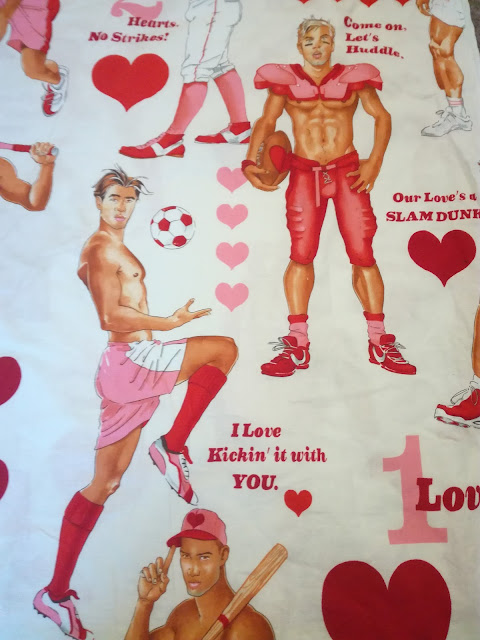 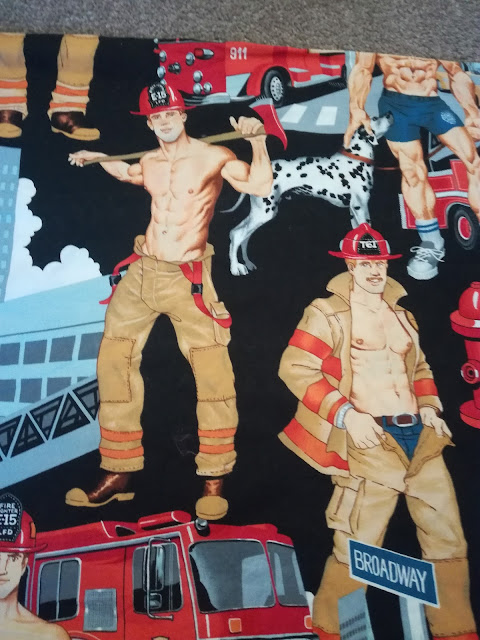 I bought this fabric on a Facebook fabric resale group as well and the toughest part about this stocking was choosing which hunks would be the outside of the stocking and which would be the lining. 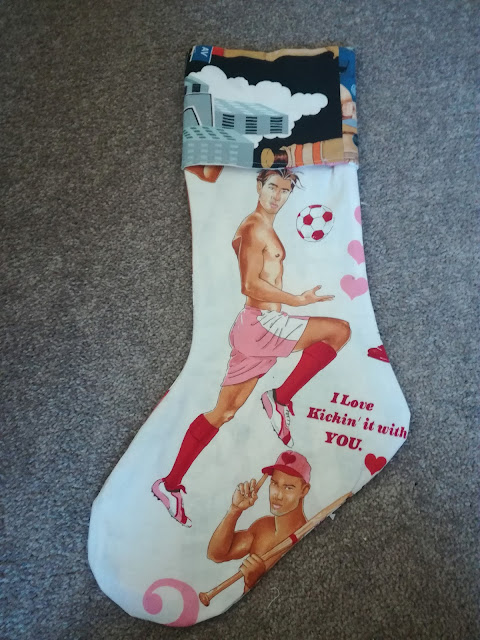 In the end the sports hunks won out - mostly because I loved those cheesy little quotes! Bu the firemen hunks didn't miss out entirely, one of them is front and centre of one of the cuffs. 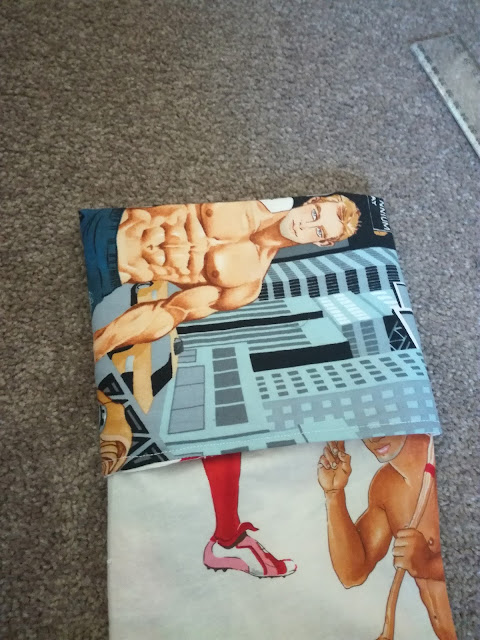 The second stocking I made probably looks a wee bid subdued compared with the hunks, its made from some fantail fabric I've had in my stash for a while that I think was originally from Spotlight. 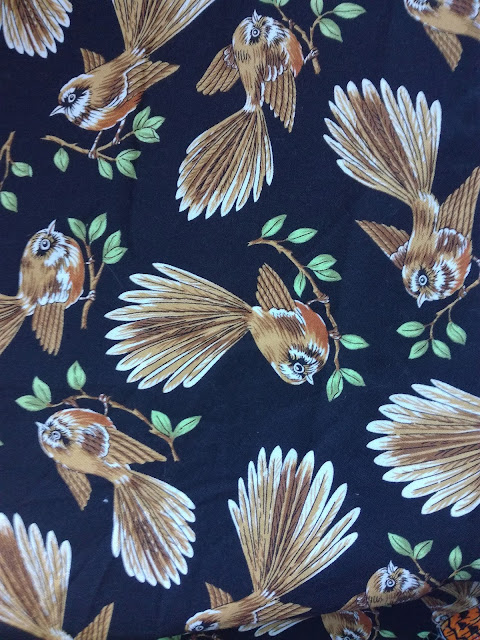 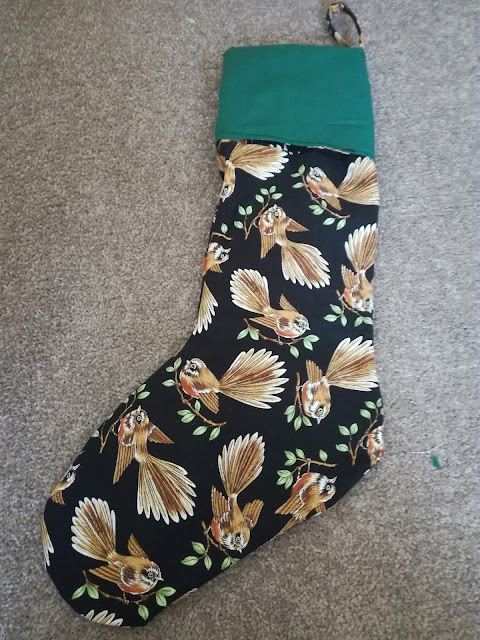 This stocking was made for a friend that has a passion for baking and is a really talented baker (especially since pretty much everything she makes is gluten free!). 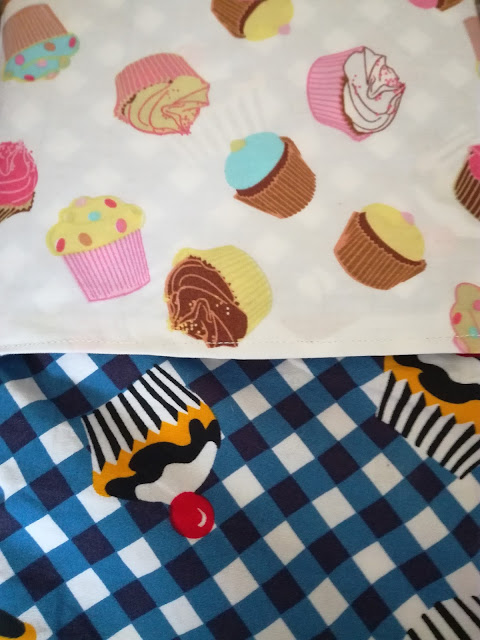 Fortunately I had two different types of co-coordinating fabric in my stash - the white fabric is from a resale group on Facebook and the blue from a fabric swap. 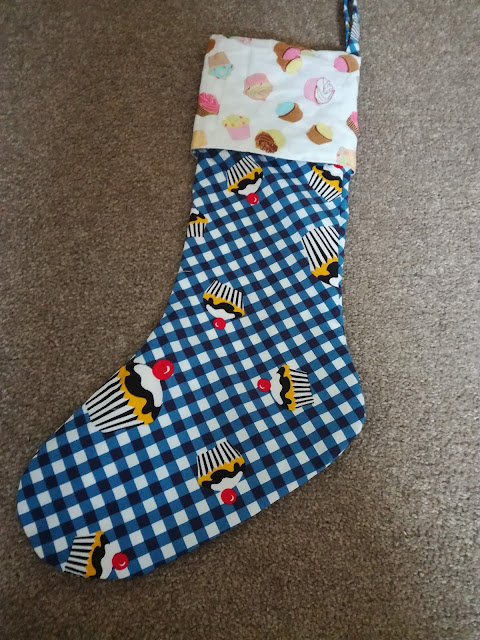 I chose to make the main stocking from the blue fabric as the white fabric was very thin (which is probably why it hasn't been used for anything else!) and I think it was a good decision as the blue fabric is quite striking.

The next stocking is for a friend who really loves cars and also mid-century design - turns out I had the perfect fabric for that in my stash! 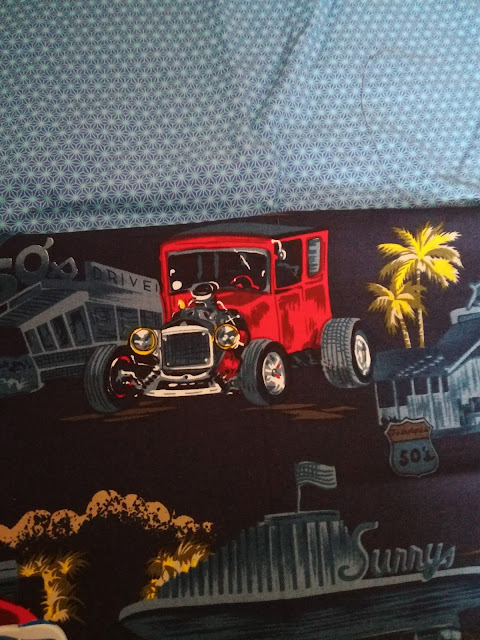 The car fabric is again from a Facebook de-stash group and the lining I've had for a while, it was originally from Arthur Toye Fabric (RIP) and I made Sophiia a skirt out of this fabric when she was much younger and also my David  Bowie bag. 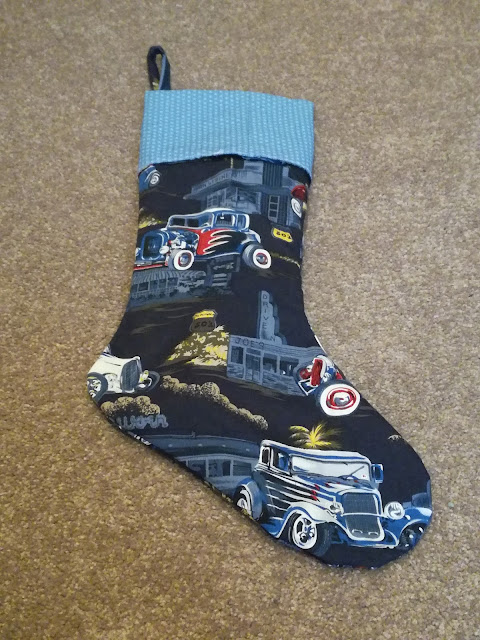 I really love the way this stocking turned out, the lining is just the right shade for he shell fabric and is a bit more interesting than being a block colour, but subtle enough not to detract from the shell fabric.

The next stocking I made is just a little bit magical - the shell fabric is pretty special with unicorns, rainbows and glitter! 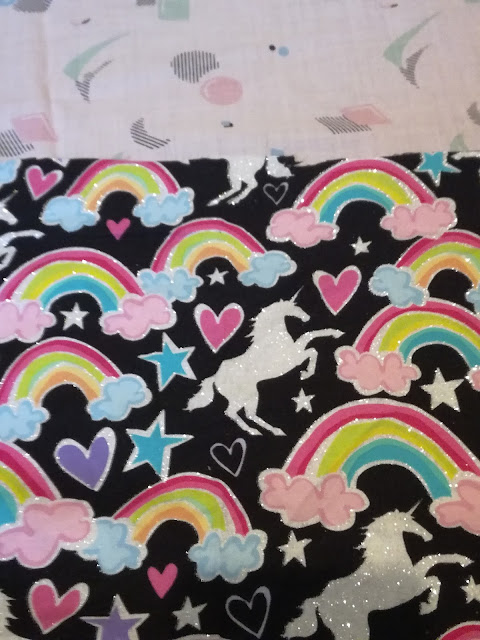 Again both of these fabrics are from a Facebook  destash group (I went through a bit of a phase, can you tell) - I only even had a small amount off the glitter fabric and bought it for smaller crafting projects. The lining fabric I had hoped to make a skirt from, however, its super thin as I discovered when it arrived and not right for dressmaking. 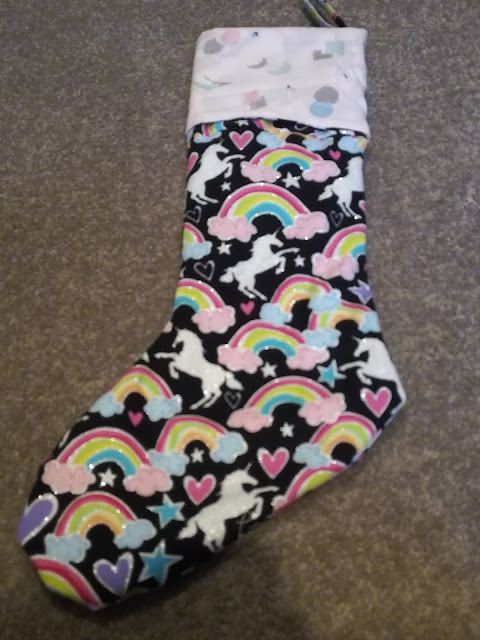 Unfortunately I didn't realise just how blurry this photo was and I can't take another as the stocking has now gone to its new home! I was happy how it turned out though, with the lining creating a cute contrast to the craziness of the shell of the stocking.

The final stocking I made was for a friend who recently moved to New Zealand from Australia and as it turns out I have the perfect festive fabric for that. 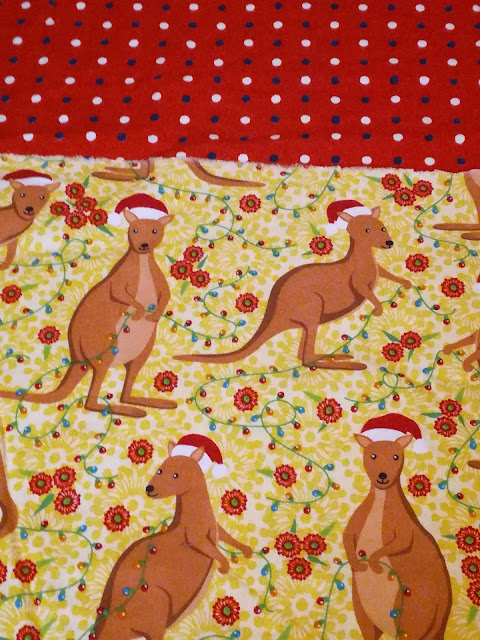 The festive Kangaroo fabric was a fabric-a-brac find, seriously, how cute is it? The other fabric is from a vintage fair I went to AGES ago! I've never used it as I've never had quite the right amount to make anything - it was too perfect not to use with the kangaroo fabric. 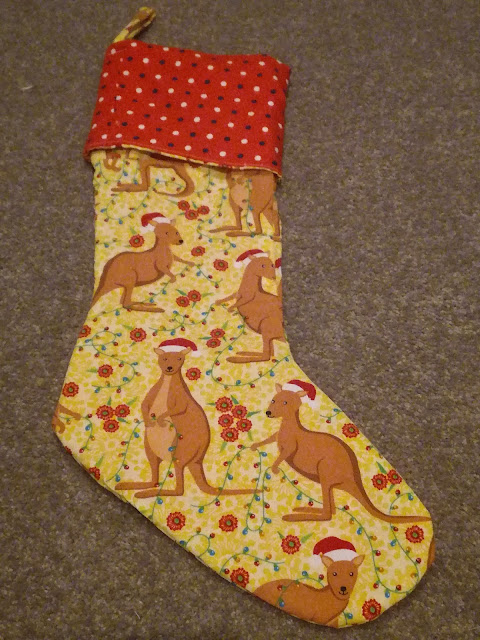 Here's my final completed (and most festive) Christmas stocking! I really love this one - the Christmas kangaroos are just so cute.

Well that's ALL my Christmas stockings (but not the last of my Christmas sewing as I still have a festive dress to share). I realised last year how much I do actually enjoy sewing crafty things, so here's to more crafty, non-garment sewing (which should also help me burn through my stash) in 2017!
Posted by Trees at 2:05 pm

Fantastic work! I bet your friends were thrilled with these lovely stockings. JanF

Those are some pretty fancy stockings. My mom made my stocking and I've never made one.
Coffee is on

Wow, these are all amazing! You have a real talent for stocking-making; they all look gorgeous. I think my favourite is the cassette tape one, but the festive kangaroo one is pretty awesome, too. xx

These are absolutely amazing!! Your are so clever and how wonderful to have such a personalized piece each, love your stash!!!