So for a long while now I've admired all sorts of handmade goods on www.esty.com - for those of you who don't know, "esty" is a place where all sorts of crafty people sell all kinds of crafty/handmade stuff.

I had never really bought anything off there, as I thought, well it does sound cheap but it's in American Dollars and by the time you add in postage it's bound to be expensive.

But this time round I found something I simply couldn't resist - it's the pendant below! A Zombie girl eating brains - how could I possibly resist? Plus when all the currency conversion was done, it only came out to a respectable $15 NZ (including postage).

So I am thinking that in the future when I feel like a "treat" or want something new for some sort of event or whatever, I'm going to hit the "esty" stores rather than the real world. Especially seen as they have people on there who are willing to make dresses (which are made to measure for $50 US).

But I have decided, since I have now officially entered the buying ranks of Esty I should try being a seller also. My account has all been set up, I've taken photo's of five trial items and will set up my "store" sometime in the next few days. Although it may be a struggle as there is SO much AWESOME stuff on there. But who knows what may happen? Fingers crossed! 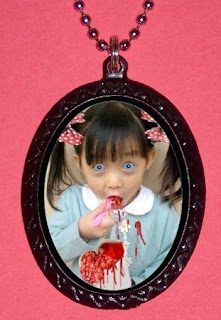