I decided to take part in the Secret Valentines Swap again this year, its the second time I've done this  swap but I think it may have been running for longer than two years. It's a pretty simple and sweet swap where you make a cute Valentines package for your "Valentine".

I like this swap for two reasons, firstly I love Valentines themed stuff, well maybe I should qualify that a bit more. I do love pink, red and white and cute hearts and celebrating all the important people in you life!

However teddy bears, red roses and lame card kind of make me vomit, what can I say, I'm complex.

Anyway one of the things I like about this swap is that it encourages people to use stuff currently in their stash, rather than buying new "stuff".

For my swap package I decided to create a cross stitch (no big surprise there!) and I used all materials from my stash with the exemption of the pattern, which I bought new. 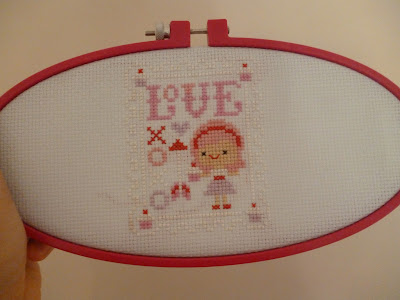 If you've been following my blog for a while, you will probably know from first glance that this is another patter from Frosted Pumpkin Stitchery, I love their patterns as they are just so cute! 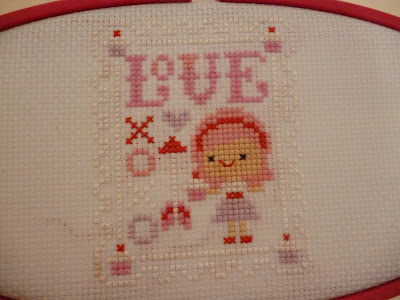 Frosted Pumpkin Stitchery has a bunch of seasonal patterns, and this pattern is their Valentines Day pattern. I've also made the Christmas Pattern and I'm pretty sure I'm going to make the Halloween Pattern later this year because I love it so much.

I don't have too much more to say about this swap, this was a lot of fun to make and I really hope my partner enjoyed her "secret valentine" present.

That's really good!!! You are very clever!!!Xx
Hope you are feeling ok.Xx

That's such a cute little cross stitch! I'm sure it will be loved. Loving the new blog design- it's really fun and uplifting. xx