Make a Purse and fill it swap

Here's yet another swap I did recently, this one was through Craftster - I'm kind of on a "swap/craft kick" at the moment, which is a good place to be! Although I am doing less garment sewing - I need to fit this as soon as I'm fully recovered!

Anyway back to the current swap - like the title says - the basic idea of this swap is to make a bag/purse/tote/whatever and fill it. For some weird reason I'm always had a bit of a fear of making bags, I  don't know why. I have made plenty of simple totes but nothing more complex.

I wanted to do this swap for two reasons, firstly make a bag more complex than a tote and secondly use up some of my fabric stash. I primarily sew garments and so most of my fabric should REALLY be at least 1.5 metres, however, I got into the habit last year of buying smaller lengths of fabric from an online Facebook group, Usually because the fabric was so cute I HAD to have it!! But theswn as a garment sewer I never really used these smaller lengths - I mean if its less than a metre I can at least make something for one of my friends kids or my niece or nephew, however, what am I even DOING with fat quarters?

I was really happy with the things I made for the swap and I managed to smash (a little) of the little bits of fabric in my stash and concur my bag making fear.

This swap required a bag to be made for your swap  partner as well as three small items for inside the bag, when I received my partners questionnaire it said she wanted a messenger bag (yikes) and that she liked bright colours (YES! I had that part covered!). 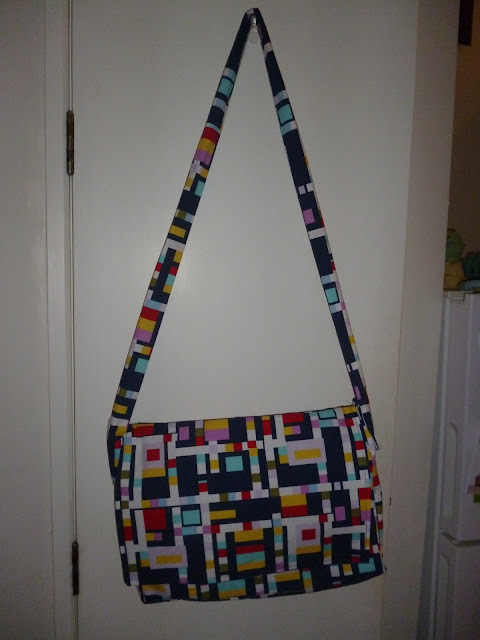 The outside fabric was bought from this Facebook group,  I bought about a metre and always meant to buy some other fabric to go with it as have it as a "feature" fabric on a garment, but that never happened. I'm happy it never happened now because it makes an AMAZING bag! 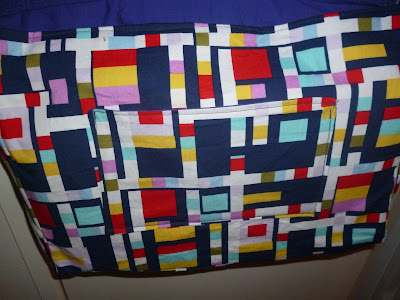 I added a front pocket in the same fabric, I didn't make too much effort to match the pattern as the pattern is kind of crazy. Plus I figure you don't want the pocket of your bag too hidden, right? 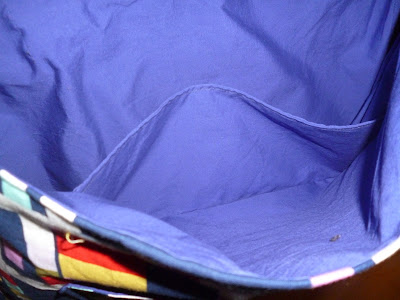 I lined the inside of the bag with some purple cotton from Arthur Toye Fabrics (RIP) and added another pocket as well - because bags need pockets! As you've realised by now, I really loved this bag and it was genuiely hard to sent it off to its new home. But that's ok, because I can make more.

One of the other things my partner said she would like in this swap was a coin purse - so I decided to make one. I had a flick through some craft books and dug through my stash and found a good pattern and some fantastic fabric, 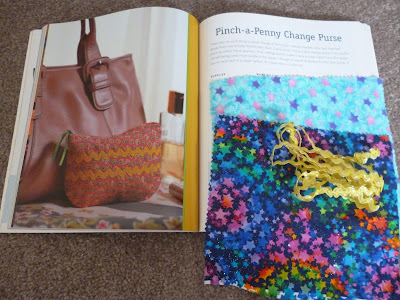 I decided to make this change purse from Sew Retro which is a book I bought from a second hand store when we were in Oregon last year. My version is kind of deeper that the version in the book (I would recommend this book by the way, its a fun mix of history and fabrics). As my partner liked colours I chose this AMAZING bright star fabric I picked  up at a swap literally years ago. The other light blue star fabric is from fabric-a-brac and I've used it before here, I also decided to use this glitter ric rac which is also from fabric-a-brac and I used it previously here. 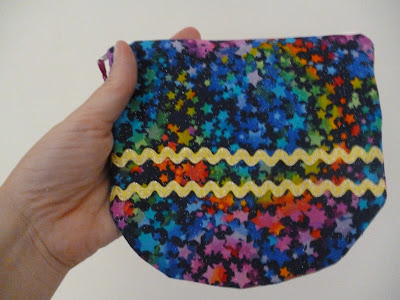 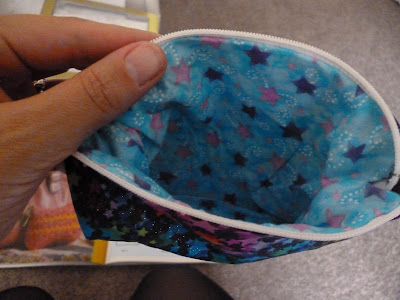 This was a pretty simple project, taken to the next level with both stars and glitter!

Another thing I wanted to make for the bag was a "craft supply roll" - I guess kind of like one of those jewellery rolls that some people take traveling but for craft stuff for projects on the go (or for when you are going to a crafternoon at a friends house). 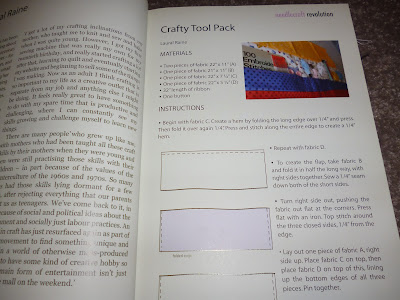 I found what I was looking for in a book I've had for YEARS, I think I might have got it from Borders Books when it still existed. If anyone is interested this is The Crafter Culture Handbook and it includes instructions for a crafty tool pack - or craft supply roll as I like to call it! The next step was to choose some suitably bright fabrics. 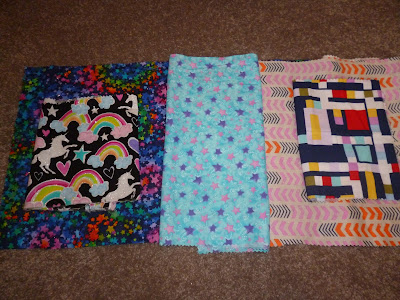 You've seen three of these already, the neon arrow fabric was given to me by my friend Emma and the unicorn fabric (how good is that fabric) was from the same Facebook group I bought the main bag fabric on. 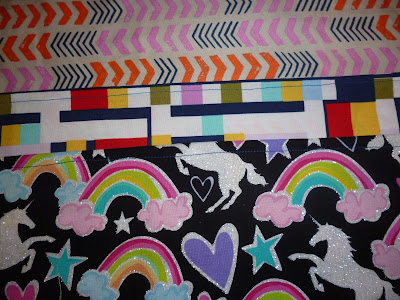 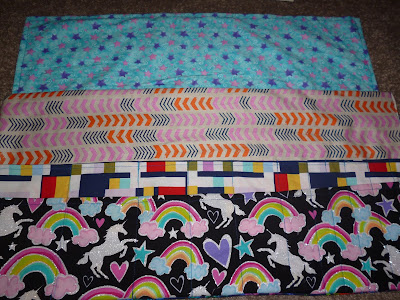 When I had cut out all the different pieces of fabric, this one was actually pretty easy to sew together. I included a few little crafty bits and pieces for my swap partner in the finished craft roll. 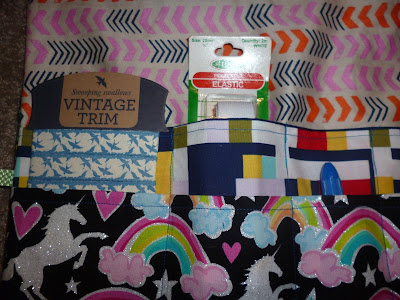 Here's a final shot of the craft supply roll all rolled up, the ribbon is from a pack of ribbons I bought years ago from Warehouse Stationary. 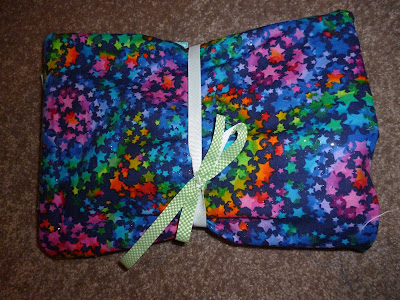 The final, and probably least interesting thing I made for this swap was a snack pouch. There's not too much to be said for the pouch, its a drawstring pouch. 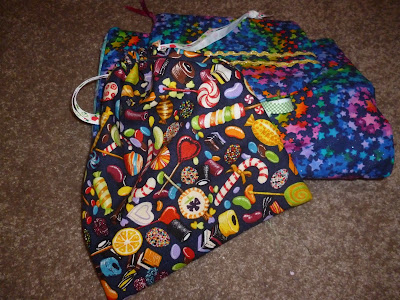 However, as it is a snack pouch, it needed appropriate food related fabric! I used a fat quarter I had bought from Pete's Emporium in Porirua at some point. This fabric is SO CUTE! Which is why I guess I felt the need to buy it, even though there was only a fat quarter - I'm glad I've finally put it to good use.

Well that's all for this swap, I do have a few others "on the boil" so to speak, here's to "smashing the fabric stash" in 2016.

Labels: craft swap, craftster, sewing, use all the fabric

They all look so cute! Well done you! I particularly love the star and unicorn print fabrics. xx

Oh my!!!! You are a genius!!!! You did SUCH A SUPER job!! I absolutely adore that starry material and the foodie one and well, all of it!!!x

Ooh lovely materials you chose, I think my favourite thing is the star purse but it's hard to pick!