My new and improved sewing cave!

I have a brand new sewing cave, well not quite, but it may as well be new because it's like a totally new space. I've spent the last few weekends getting it into order and now you can even see the floor!

The problem with the sewing  cave is that I just didn't have enough storage for everything, which meant it was a disaster and was going from bad to worse. 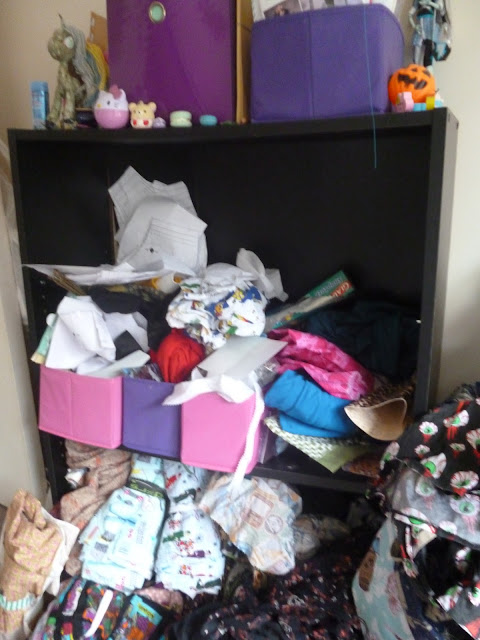 This was my fabric shelving before, this poor bookcase was literally falling apart, it wasn't designed to hold the weight of so much fabric. I couldn't fit all my fabric in here, so the rest went in the cupboard. 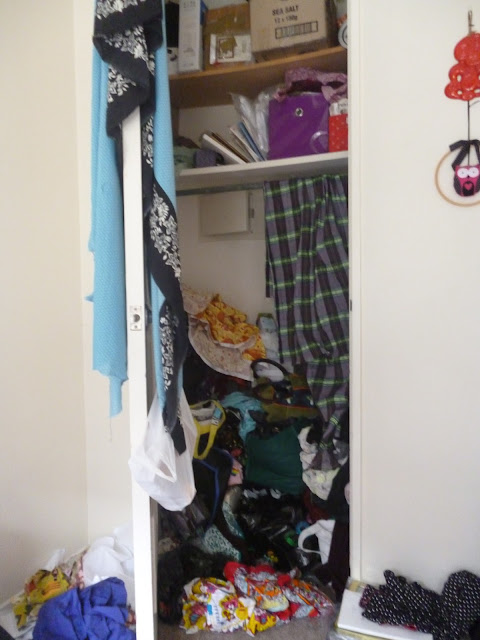 But the cupboard storage was far from ideal, there aren't any shelves in the cupboard and the buckets I had for storage were overflowing. 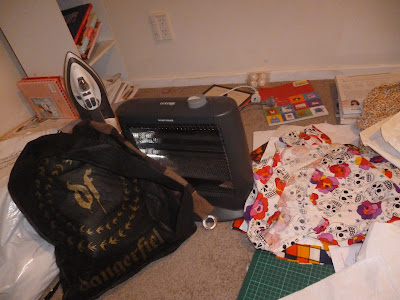 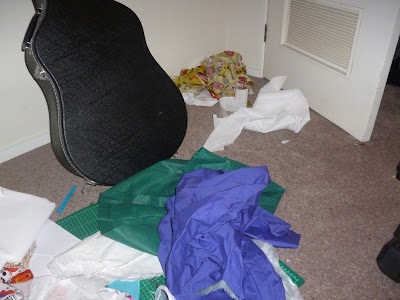 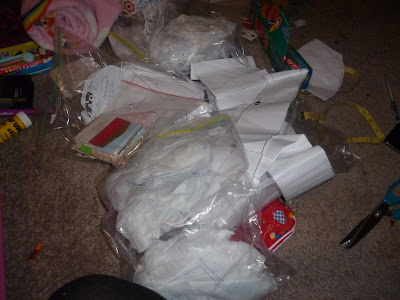 There was also random "bits" everywhere because I had  no room to put anything!! There were patterns , projects and other sewing stuff throughout the room which was making it almost unusable. 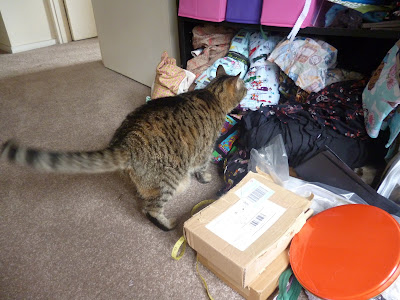 Mia was really the only one who was happy with the room, because it meant she had lots of places to hide! The first thing I needed for the room was more storage, so we bought some big and solid shelves that we thought would actually be stable enough to hold ALL my fabric! We had some kit set shelves delivered from Warehouse Stationary and Rich built them for me. However, before we could get them in the room, I had to empty out the current bookcase and get it out of the room which was difficult as there was so much "stuff" in the way! 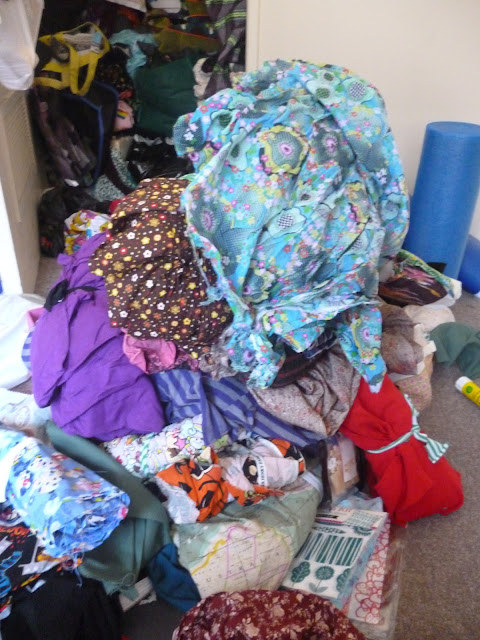 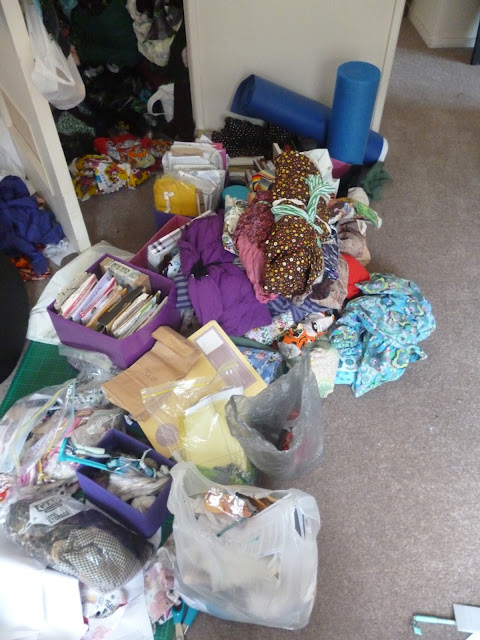 Mia was again pretty happy with all of the piles of "stuff" to play in, she loves to burrow in fabric. 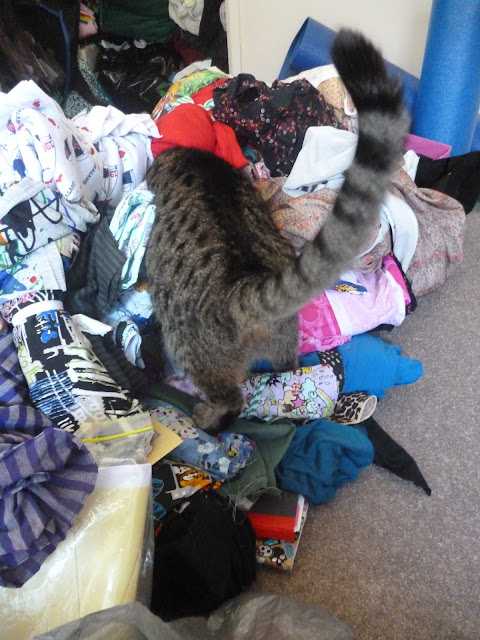 I bought the new shelves in and they were SUPER heavy, which means they are surely strong enough to hold all my fabric right? 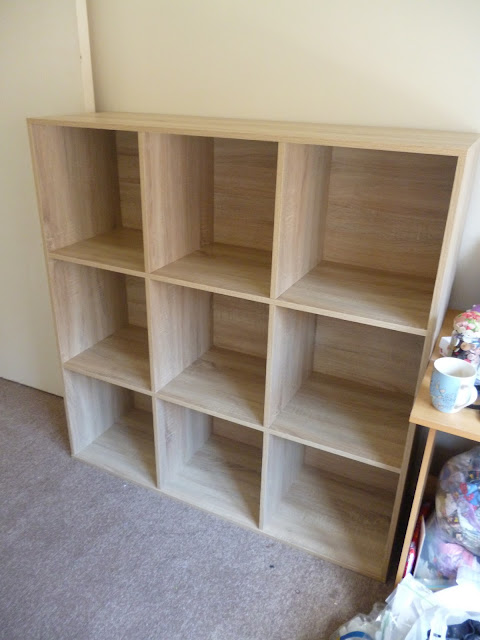 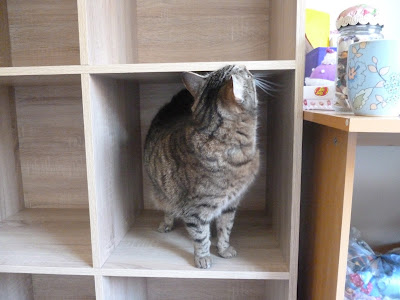 Next up was the biggest task, fitting ALL of the fabric into the new shelves. I wasn't convinced it would all fit. The only way it would fit was if I rolled all of my fabric up to store it, this took a while. 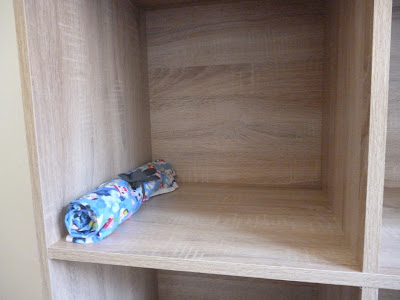 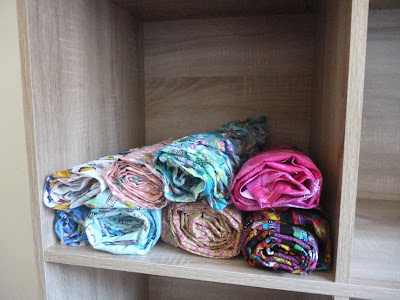 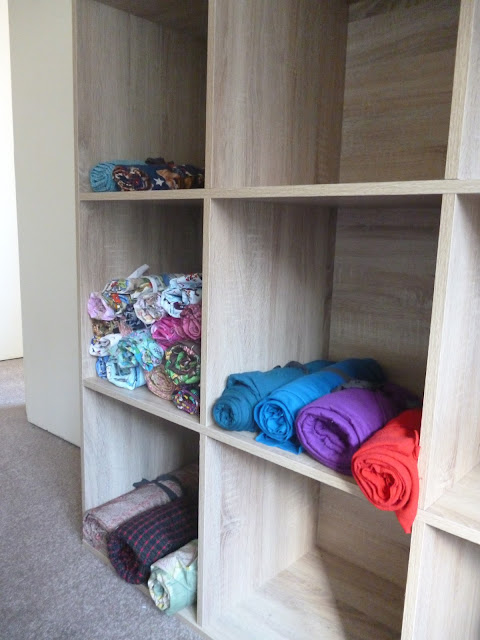 I decided to put the biggest lengths of fabric and the bulky fabric in the bottom cubes, I made a cube especially for my stretch fabrics (I only have one cube! I have much less stretch than I thought) and I made a cube of fabric a brac fabrics. All the other cubes I filled up with my wovens. I'm not going to lie to you guys this took a LONG time - as it about a week and a half. I just did it in small bursts as there is only so much fabric rolling a girl can do! 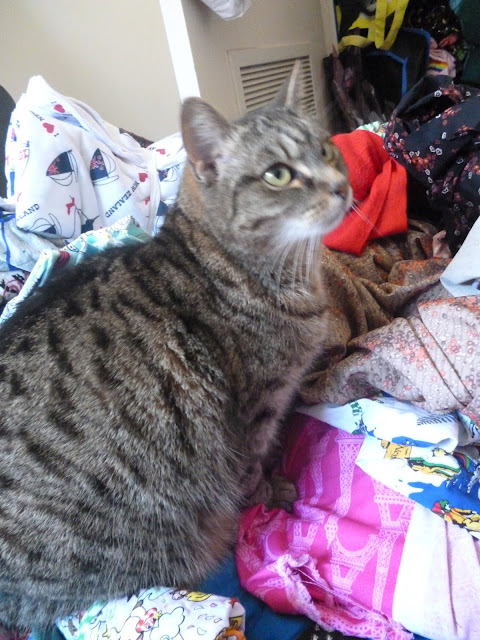 I was a good chance to go through my whole stash as well and I now have another bucket of fabric for the next Fabric-a-brac (as long as we get a table again!).
With ALL of my fabric FINALLY in one place, it was time to tackle the rest of the room. Rich was able to repair the old bookcase, so I put that inside the wardrobe so I actually had storage space. 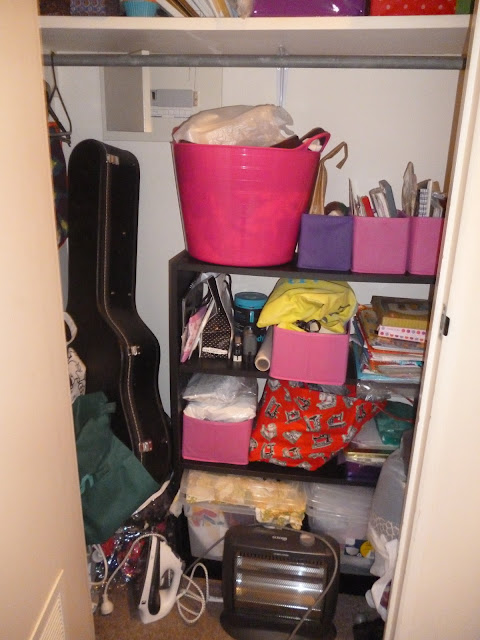 All kinds of crafty bits are in here - my unwanted fabric (hopefully to be sold), sewing magazines, notebooks, printed PDF patterns as well as other sewing room essentials like my heater and iron. 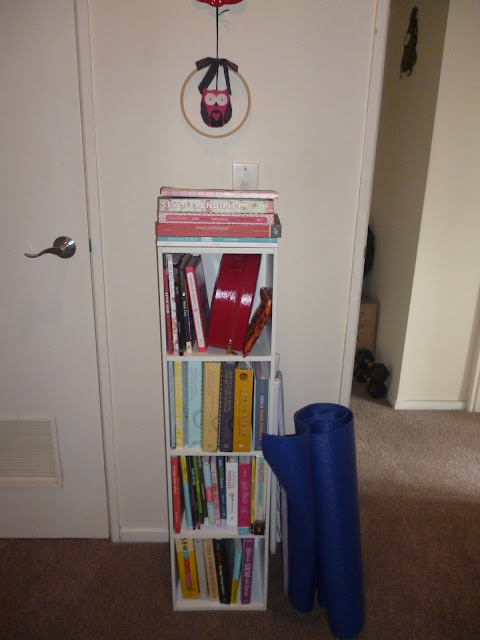 I moved my bookcase with my sewing and craft books on it, the bookcase had been a little messy but moving the magazines into the cupboard helped to clean it up. Also that's Rich's yoga mat as he now actually has room to do yoga and stretches in the sewing cave! 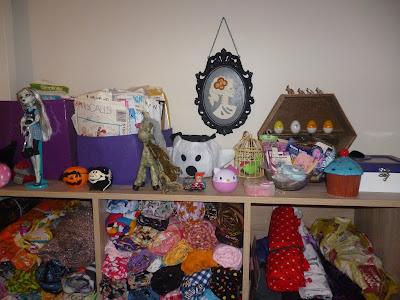 I didn't want this to be a boring space, so I put some of my patterns (more in the cupboard) and treasures on top of the bookcase. I love the little skull cameo Ria bought me back from the USA. I'm hoping to frame a few more cards and prints I'm got lying around to create a wall of fun pictures. 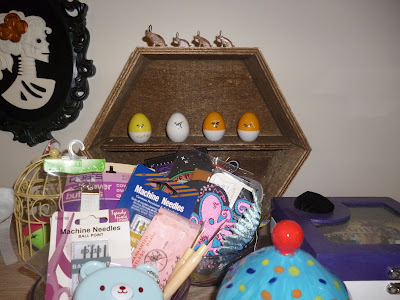 I've got a couple of bowls with useful sewing things - one bowl with machine needles, quick unpick (or seam ripper, depending where you're from) and other odds and ends. The other bowl is all patches - I really need to use some of these! The purple sewing box is from Ria, as are the tiny bunnies. The little Guedetama (egg guys) are from my friend Lillian in Hong Kong and they are actually stamps! 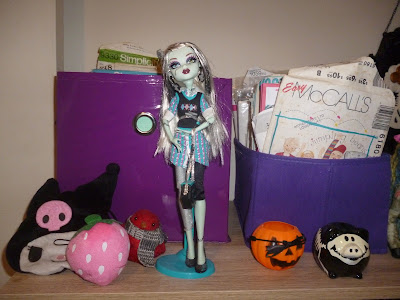 My one and only monsters high doll from my niece a few years back, skull piggy bank from Vany and a few other treasures. 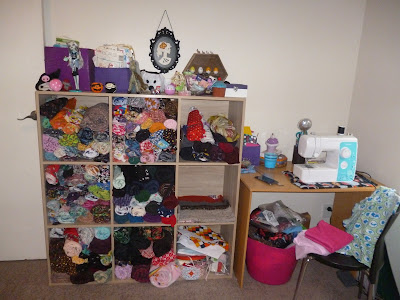 Final view of my new cupboard - on the left hand side the top cube is only half full, the bottom cube has notions and current projects and the middle cube? 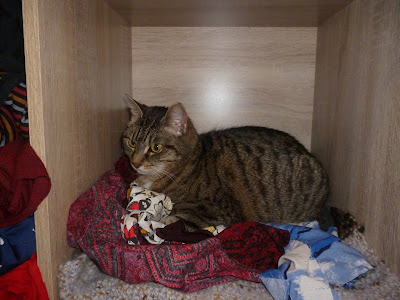 It's Mia's bed of course, she didn't like it that much when there was only one of her blankets in there so we added a few fabric scraps to make it feel like home.

The sewing room is ALMOST complete, we've ordered a futon as well so when friends and family come to stay they can have a real bed instead of a air mattress.
Posted by Trees at 4:51 pm

Wow, your fabric collection is amazing! You have so many! I'd love to have a rummage through them, and see all the awesome patterns and prints you have. Your new shelves look great, too, by the way, and look like they were worth all the time and effort it took you to put it all together. Go you!

Oh, and I heard about the earthquake in NZ, and I'm not sure if it hit near you, but I hope you're both safe and well. xx

Oh wow your room looks amazing now~ I bet you and Mia are really excited to spend more time creating together.

It looks brilliant!! You can't know how happy it made me to see someone else had a messy spare room...well until now!!!x